Welcome to our first Minus 5 Monday! We are excited to have you and your children on board. What we aim to achieve with our sugar reduction programme is to make a nations children, parents and teachers aware of the amount of sugar in the food that we are consuming and the associated health risks.

You will soon start to see our -5 label appearing on food and beverage items with 5% or less sugar making it easy to identify better options when grocery shopping. Our children are a great place to start, they absorb so much information, but they need your support to start making the right choices regarding their diets.

So let's make a difference, send your children to school on Monday with the best lunch possible and start making a difference! We have got some great information on the subject from our Nutritionist Stacey (www.mykidslickthebowl.com) and 3 amazing lunch box options from Geraldine (www.facebook.com/Thelittlekiwilunchbox) all depending on how adventurous your feeling. Don't forget! There will be a spot prize in every class for the best lunch. The average daily sugar intake for New Zealand 11-14 yrs is 32 teaspoons. I am sure we can all agree that amount of sugar is absolutely staggering. Jaw dropping in fact.

Hello and welcome to the first article in a series I am writing for Minus 5. Let me start with a brief  introduction. I am Stacey Kemeys. I am the editor and chief of the My Kids Lick The Bowl website and blog. Prior to having kids I trained and worked as a Dietitian for 15 years. I am no longer a practicing Dietitian but I remain passionate about sensible eating for kiwi children and equally passionate about helping kiwi kids eat less added sugar. It is for this reason that I am very much on board with the minus 5 labeling concept, making it easier for New Zealanders to identify options with less sugar.

32 teaspoons that is a lot!

This staggering statistic comes from the National Nutrition Survey which was conducted in 2002. Since this time there has been a great deal of movement on the sugar front. More specifically on the need for us to greatly reduce our sugar intakes. Two robust recommendations from two reputable professional bodies have been published.

What are free sugars?

The WHO defines Free Sugars as any Monosaccharides or Disaccharides (sugars) added to food and drinks by the manufacturer, cook, or consumer and those sugars naturally present in honey, syrups, fruit juices and fruit juice concentrates. So essentially from the WHO perspective they say reduce added sugar intake.

I started the article with the fact that kiwi kids are eating 32 teaspoons of sugar per day. I confess, to fairly compare the new WHO and AHA guidelines to the average New Zealand Childs intake we need to delve a little deeper, as the National Nutrition Survey data accounts for total sugar intake not added sugar. Added sugar being the one of most concern. The 32 teaspoon total I quoted will include naturally occurring sugars within fruits, vegetables and dairy products which are not included in either the AHA or WHO recommendation.

The national nutrition survey data does not break down what is added sugar and what was not but
it does provide data on the different types of sugar eaten. For example sucrose intake. Sucrose is
essentially table sugar. So for the purposes of this exercise I think we can safely classify it as
added sugar.

The average daily sucrose intake for kiwi kids is 15 teaspoons

Not as staggering as the 32 teaspoons, but still jaw dropping none the less. Especially when you think that is 15 teaspoons of table sugar added to their meals and snacks. Compared to both the World Health Organisation guidelines and the American Heart Foundation guidelines this is too much. (Even if we use the more lenient 10% of total energy WHO recommendation, the average kiwi kid exceeds this) The chart below tells the story. 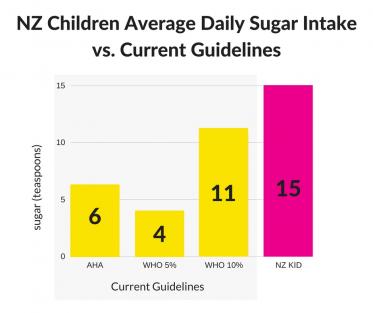 The national nutrition survey data is fairly out dated now. Although it is the latest information we have on New Zealand children’s sugar intake the research was conducted in 2002. It is now 15 years old. I suspect however that the sugar intake of New Zealand children is probably still far outside the current recommendations for good health. I suspect this because of two reasons.

1. NZ has high rates of Childhood Obesity. In fact we have the 3rd largest percentage of obese and overweight children in the OECD. The 2015/2016 NZ Health survey found 30% of NZ children aged 2-11 years were overweight or obese

2. Studies in countries with dietary patterns similar to New Zealand continue to find the sugar intake of children to be high.

I personally think that based on these 2 reasons it is safe to say that kiwi children eat too much sugar. I also believe that this is because sugar is everywhere these days. It flaunts itself openly in many forms, like soft drinks, cakes, biscuits and sweets. We know it’s there because these are sweet tasting foods. But the sweet mistress also hides in other processed foods that many people wrongly assume are sugar free because of their savoury nature. Items like pasta sauces, some crackers, many sauce bases and a lot of other processed foods. Then there are the foods that are loaded with added sugars but are marketed as healthy, many of which target children.
Discretionary foods like breakfast cereals, muesli bars, and sugary drinks. This is why I welcome a clear labelling system like the minus 5 initiative to help New Zealanders quickly identify lower sugar options.

I am also so excited to be involved in the minus 5 initiative through my series of articles. These will be published monthly....

Is there a healthier sugar?

How to identify added sugar in an ingredients list Everyone knows how to make a sandwich.

If your the super orginised type and making it the night before, store in the fridge to keep everything fresh. Maybe add the hummus in the morning. To prepare the wrap place your lettuce in the middle of your wrap, then layer with your desired fillings. The pictured wrap contains lettuce, tomato, avocado, grated Edam cheese, ham and aioli. Fold over one side and then roll the wrap over keeping it tight. Cut in half and push through a toothpick to hold each half closed.

When making your wrap keep the wet ingredients away from the wrap itself or it may go soggy over the day. You can avoid this by simply placing your lettuce down first and then your wet fillings. To keep the wrap held together after rolling without creating rubbish you can place a tooth pick through it to hold it in place. Adding fruit into the Greek yoghurt will help to naturally sweeten it without needing to add any sugar. When adding things such as yoghurt and meats to the lunch box you will need to keep it cool, you can purchase a reusable lunch box ice pack or an insulated lunch bag. Muffins are a great lunch box filler. Pre heat the oven at 180’C. Dice 4 slices of bacon into small pieces and fry in a pan over medium heat. Allow to cool. Add cream style corn to a bowl with 1 egg and 3 tbsp of oil, mix till combined. Finely dice 1/2 a red onion and add to the bowl along with the cooled bacon and 1 cup of grated cheese. Once combined add 1 cup of flour, 1 tsp baking powder, pepper and 1/2 tsp salt. Grease or line a muffin tray with baking cups. Spoon mixture into the muffin tray and bake for 20 minutes.

If you are adding fresh baking or cooked items to the lunch box you will need them to be completely cooled to avoid creating any condensation in the box which will turn other items in the box soggy over the day.

A Big Thank You To The Following:

A big thank you to the great team at Kathmandu for seeing the benefits of our School Lunch Programme and getting behind it!